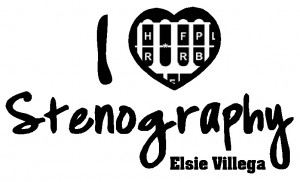 At the age of 18, Charles Dickens reportedly became a professional stenographer. He used his verbatim skills for the newspaper, the Mirror of Parliament. He worked there for about half-a-decade before launching a career as a novelist. His work as a stenographer clearly influenced his writing. He made one of his most popular characters, David Copperfield, a parliament stenographer too.

Dictionary Challenge: Day 21
68 entries today. Total Dictionary Tally: 62,086. Aiming to be at 70,000 by the end of the year.
Happy Dictionary Building,
Elsie Villega

While practicing this video, I used “THE COURT” designation for the voice of the narrator.

Ecchymosis is defined as, “the escape of blood into the tissues from ruptured blood vessels.”

This video is great for practicing speaker designations, especially if you’ve recently advanced from theory. It’s a good video to get you comfortable using Q & A symbols. A third party even interjects a couple of times.